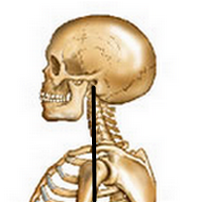 Lateral view of the skull and upper body, noting the line of balance.
​
​We can think of the human body in terms of architecture:
​
it is a high-rise building that is balanced around a central flexible curved core.

The core consists of the feet, legs, pelvis, and vertebrae. But this building also has to move- to walk
and also to sway and move individual parts, such as the arms and the head. As such, keeping the body's balance, so that the muscles might focus on their primary functions, is of utmost importance.

the heavy weight at the top, the head, atop the ​central core, the vertebrae.

Contrary to what many think, the joint on which the head sits is not located in the back of the neck;
​it is actually located far forward, right in front of the ears. This joint, the Atlanto-Occipital (AO) joint, is where the head balances; there is as much skull behind it as there is in front of it.
When we move the arms we do not simply swing the limbs from the side of the body.
​​The "arm" actually is called the Shoulder Girdle, and includes the collar bone (clavicle) and the shoulder blade (scapula), as well as muscles extending to the front of the body as well as down the back to the pelvis. When the arm moves, the clavicle swivels on its joint, the Sterno-Clavicular (SC) joint, and the scapula rotates around the rib cage. With this in mind, it is imperative that the scapula have free range of motion.
Obviously, if the arm is going to have full range of motion,

the scapula must be free-moving.

two of the muscles that move the scapula, the Levator Scapulae and the Trapezius, ALSO MOVE THE HEAD, meaning that if they are tightened, holding the head, the scapula is locked in place and the arms are frozen. One must then use other arm-moving muscles to fight them in order to get the arms to move, resulting in a tug-of-war, or co-contraction, between our muscles. Does this sound like what you feel sometimes during fast string crossing or spiccato?
﻿

Now, if the head is balanced on the AO joint, the muscles that move the scapula are relaxed

and can do their jobs of moving the arms without having to hold the head. And that is exactly what the WAVE is designed to do-

​allow the player to balance their head, liberating the arm-moving muscles and allowing for freer motions.


For a more in-depth treatment of the shoulder, please watch this animation:
buy now